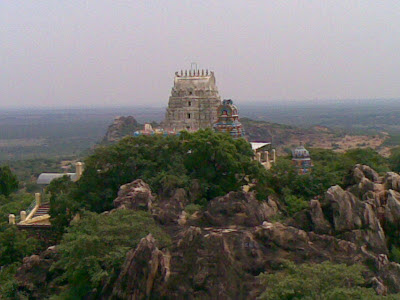 Vedagiri Lakshmi Narasimha Swamy temple was built on a small hill, popularly known as Narasimha Konda,  by the banks of river Penna about 15 km from Nellore.

Legend goes that the sage Kasyapa established the temple on the bank of Pinakini. And the vedic scripture 'Brahmapurana' reveals that the seven sages (Saptarishis) performed 'yagnam' (Sacrifice) on the top of Narasimhakonda.

Vedagiri Lakshminarasimha Swamy devasthanam came into being nearly 500 years ago, on the summit of Narasimha konda. According to the rock inscriptions, this temple was built by the Pallava king Narsimha Varma in the ninth century.


There are seven tanks (Koneru) around the temple with a great hill top view of the river Penna and the Nellore city. Jonnawada is just a couple of kilometers from here on the other side of the Penna river. 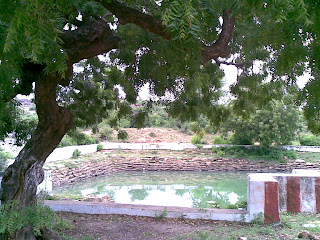 You can also find two wind mills atop this hill where you can get to see them from close. Good for students and clean energy enthusiasts.

Bramhotsavams gets conducted at this temple very grandly in the month of May of every year.

http://simhapuri.in/300/vedagiri-lakshmi-narasimha-swamy-temple-narasimha-konda/
Posted by Rajesh. CTR at 5:48:00 AM