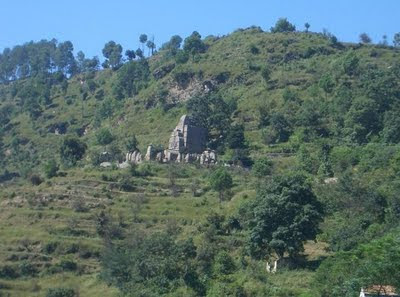 Location : Katarmal is about 25 kms from Ranikhet. Seven kms away from Almora, in Uttarakhand state.

Katarmal is a 800-year old Sun Temple and is the second in importance after the Sun Temple of Konark in Orissa.

The deity of the sun temple in Katarmal is known as Burhadita or Vraddhaditya (the old Sun God). The temple, noted for its magnificent architecture, artistically made stone and metallic sculptures and beautifully carved pillars and wooden doors, has a cluster of 44 small, exquisitely carved temples surrounding it. 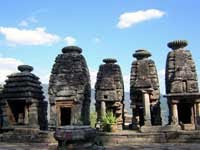 The present mandapa of the temple as well as many of the shrines within the enclosure have been constructed much later. The image of Surya in the temple dates back to 12th century. The idols of Shiva-Parvati and Lakshmi-Narayana are also found in the temple. However, the intricately carved doors and panels have been removed to the National Museum in Delhi after the 10th-century idol of the presiding deity was stolen.

A beautiful trek leads you to the Temple. If anyone don't feel like trekking they can also drive very close to the temple.

came across your blog completely by chance and am completely loving your articles. its very good work and amazing compilation.

my mom is from almora and we visited this temple years ago, your article refreshed my memory. thanks again :)

Hi
Its a nice article on Katarmal Sun Temple. A great introduction on the temple. I am also from Almora.
if anybody want to visit the he can use the link to reach there i.e.
http://chardhamyatra-tour.com/katarmal-sun-temple-tour.html

Very nice post. I have seen a great write up here on the same sun temple have a look. www.caleidoscope.in

Hi Its a great article. There is a great info on the sun temple on this site have a look. www.caleidoscope.in