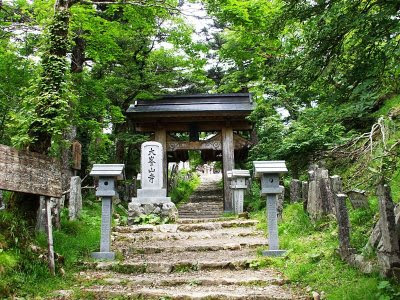 Location : This Temple is situated on the top of Mount Omine (Mt.Sanjo) in the Kansai region, Honshū, Japan.

The temple Ōminesanji, is the headquarters of the Shugendō sect of Japanese Buddhism and the entire mountain is part of a pilgrimage and training ground for the yamabushi.

History : The monastery at Mount Ōmine was founded in the 8th century by En no Gyōja, as a home for his new religion of Shugendō. Shugendo literally means "the path of training and testing," and is based on the self-actualization of spiritual power in experiential form through challenging and rigorous ritualistic tests of courage and devotion known as shugyo.

Ban on Women : Traditionally, women in Japan were not allowed to climb mountains sacred to the Shinto religions. While the origins of the traditions can only be guessed at, originally these areas were banned to unclean people, such as those who had recently had a death in the family, or women on their period, which was believed to be linked to Shinto concepts of impurity, specifically the "blood impurity" brought on by menstruation and childbirth.

Other sacred mountains had different traditions, such as segregating the sexes by season, allowing women to climb at some times and men to climb at others. It is believed that the reason for this ban was to remove thoughts of temptation from the Yamabushi monks who are supposed to practice strict self-denial of a hermit in isolated mountain. Eventually the bans came to be called Nyonin Kekkai and were off-limits to women only.

Mount Ōmine is the headquarters of the Shugendō religion, an all-male asetic practice with a long tradition. Because of decrease of asetic practioners in modern Japan, most Shugendō-related mountains are no longer used for mountain retreats, and are now tourist attractions. Consequently, these sites removed their gender-restrictions and only Mount Ōmine remains.

There are three shugyo (Tests) on Mount Ōmine, each said to strengthen the spiritual power of the challenger. Climbers not wishing to take the tests can easily walk around them.

* Kane Kane Iwa - The Hanging Stone, also known as the Crab Rock due to the position one must take when ascending, is a roughly 30-foot tall cliff, most of which is easily climbable. However, at the top there is an overhanging rock. To climb the rock, one must swing out over the overhang, using an embedded length of chain to ascend.

* Nishi no Nozuki - The Insight from the West is a sheer cliff, roughly 200 feet high, roughly the same height as the Golden Gate Bridge. Novices are held head-first over the cliff, where they are compelled to admit their faults and promise to follow the social and religious laws.

* Byodo Iwa - The Rock of Equality is only available by special request. It is a rock tower, overlooking a deep cliff. Several projections from the wall allow individuals to cross over to the other side.