According to legend, at some time in the Satya Yuga, Daksha performed a yagna (named Vrihaspati) with a desire of taking revenge on Lord Shiva. Daksha was angry because his daughter Sati had married the 'yogi' God Shiva against his wishes. Daksha invited all the deities to the yagna except for Shiva and Sati. The fact that she was not invited did not deter Sati from attending the yagna. She had expressed her desire to attend to Shiva who had tried his best to dissuade her from going. Shiva eventually allowed her to go escorted by his ganas (followers).

But Sati, being an uninvited guest, was not given any respect. Furthermore, Daksha insulted Shiva. Sati was unable to bear her father's insults toward her husband, so she committed suicide by jumping into the yajna fire.

Enraged at the insult and the injury, Shiva destroyed Daksha's sacrifice, cut off Daksha's head, and replaced it with that of a goat as he restored him to life. Still crazed with grief, he picked up the remains of Sati's body, and danced the dance of destruction through the Universe. The other gods intervened to stop this dance, and the Vishnu's disk, or Sudarshana Chakra, cut through the corpse of Sati. The various parts of the body fell at several spots all through the Indian subcontinent and formed sites which are known as Shakti Peethas today.

In Purnagiri the Naabhi (Naval) part of Sati fell and people come here to worship the devi here.

Description :
From Purnagiri, also known as Punyagiri, the river Kali descends into the plains and is known as Sharda. For visiting this shrine, from Tanakpur,there is a motorable road till the Thulligad which is located at about 14 Kms from Tanankpur. Different types of public transport are available from Tanakpur to Thulligad. From Thulligad the road for reaching upto Tunyas is under construction. People go on foot from Thulligad to Purnagiri temple. After the ascent of Bans ki Charhai comes Awalakhan (the new name is Hanuman Chatti).
The south - western part of 'Punya Parvat'(Purna giri) can be seen from this place. Various temporary shops and huts are present on the road from Hanuman Chatti till Tunyas. On the way there are various dharamshalas and hotels etc where people can have rest for few hours, get fresh and can have snacks or meals.
From Tunyas,the Maa Purnagiri temple is about 3 Kms. Form here after walking some distance the 'Baans Ki Chadai' starts which is now made convenient by the stairs and iron railing.
From the highest point (the temple) of Purnagiri hill the pilgrim can see the expanse of Kali, its islands, the township of Tanakpur and a few Nepali villages. The old Buram Deo Mandi is very close to Purnagiri. From Tanakpur or Purnagiri it is possible to trek to Tamli and even to Jhulaghat along the Kali river. jai matadi.
It is not advisable to visit here during rainy season as there are frequent landslides in the hills and the path to temple is not well maintained during this season.

As per a common belief, every person who comes here with sincere faith and devotion has his prayers answered. The pilgrims flock to Purnagiri temple during the navratras and tie a tread to take a wish. If their wish gets fulfilled, the pilgrims come back and untie the threads. 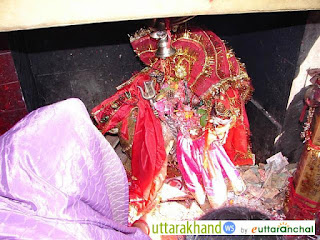 The Purnagiri temple is visited by thousands of devotees throughout the year. The temple fair is organized between the months of Poush and Chaitra (March) during which the entire valley of Punyagiri reverberates with the sound of chants, hymns and devotional songs.

During Navratras, in the Chaitra month of the Indian calendar (in the month of March  - April), the temple of Purnagiri organises Purnagiri Mela. After worshipping Mata Purnagiri, people also pay their tributes to her loyal devotee Bada Sidth Nath at Brahmadev and Mahendra Nagar in Nepal.
Every year, a fair is organized on Vishuwat Sankranti, which continues for about forty days. Next to the Holi festival, the longest fair of Kumaon.
Facilities:
During the chaitra navratra mela, basic amenities like medicines,hospital,telephone etc are available. The nearest petrol pump is in Tanakpur, 20 Km from here.

Season: Round the year.